Why can we learn something about the deformation of rocks when we deform analog materials? 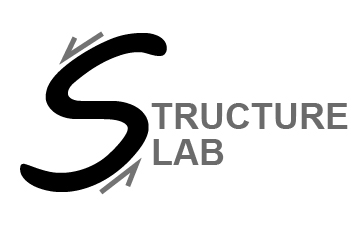 The answer to this question can be given in one word: scaling. In general, the problem with deforming real rocks is often that we need high pressures and temperatures and sometimes very long timescales to deform a rock at the same conditions that would for example exist in the middle crust at approximately 15 kilometers depth. This means we need heavy machinery and small sample sizes, which in return means that in most cases we cannot directly observe what happens during deformation. At this point scaling comes into play. If we find materials that deform in a similar manner to rocks but, let’s say at lower pressure and temperatures, we can build a deformation apparatus where we can actually observe the deformation while it happens and where we are not restricted by sample size, time, etc. With other words, we choose a material that has a rheology which scales to the rheology of a real rock. However, choosing a material as a rock analog also requires making some compromises. In the materials we are using in the structure lab we, for example, do not take chemical processes into account. This means that our materials are scaled with respect to things like rheology and strain rates but they have a completely different chemistry compared to actual rocks. 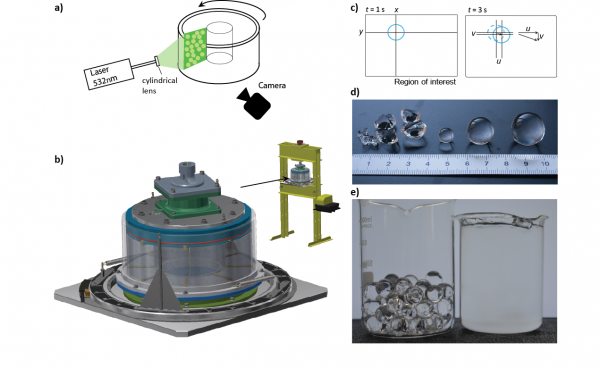 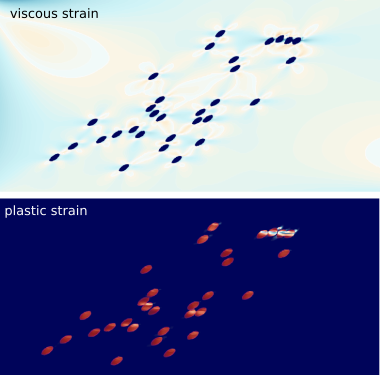 Tectonic faults are cracks in the Earth’s crust accommodating the slow motions of tectonics plates. The stress accumulated around faults can be released slowly when faults creep over long periods of time. This viscous behavior is considered aseismic because it does not produce earthquakes. Faults can also slip abruptly by brittle failure. Most tectonic faults exhibit both viscous (no earthquake) and brittle (earthquakes) behaviors. Understanding how fault behaviors interplay is critical to explain earthquakes and improve hazard forecasting. This task is, however, challenging because these behaviors occur on very different time scales. Here, we use experiments and numerical modeling to explain fault dynamics. We use a unique combination of viscous and brittle materials which, mixed together, behave like faults. By deforming the mixture, we identify the factors producing slow deformation and abrupt slip. Using modeling, we apply the results to natural systems and explain the behaviors of fault. The project has strong implications for earthquake hazard forecasting. Furthermore, it fosters the development of teaching materials for a science communication class. The goal is to increase students’ awareness of scientific methodology and strengthen their ability to communicate their results to a broad audience. This five-year award is co-funded by the Prediction of and Resilience against Extreme Events (PREEVENTS) program. Funding source: NSF CAREER #1843676 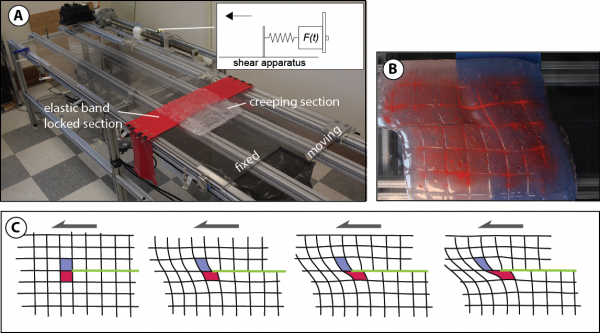 This project examines whether changes in how a fault moves or "slips" are linked to observable changes in the deformation of the regions around the fault. Physical experiments in a laboratory are used to replicate aspects of the San Andreas fault system to isolate individual factors controlling deformation and to understand the relationship between how a fault slips and where deformation occurs. Understanding how deformation is distributed between a fault itself and the surrounding regions is critical for forecasting regional earthquake hazards. This multi-institution project (ISU, Carleton College) supports five students (high school, undergraduate, and graduate levels), and develops new computational tools for visualizing experimental results, along with curricular activities for middle school Earth Science courses.

The effect of a liquid phase in a granular system on force distribution during deformation: Chris Ladd, M.S. student and Olivia Marcelli, M.S. student

We investigate the stress distribution in a two-phase system where one phase is solid and the other fluid. These systems are important geologically – for example as petroleum fluids in reservoir rocks – but have only received limited numerical and experimental investigation. Understanding the stress distribution provides insights into the mechanisms of how such systems deform and fail, which has a large impact on the effective extraction of petroleum. We perform physical experiments on photoelastic uncemented and cemented granular materials with a viscous pore fluid during shear deformation. 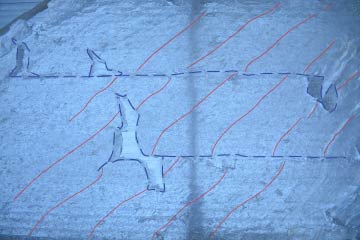 In addition to earthquakes, the scientific community has now been aware of strain transient-slips for the last decade. These transients manifest in slow-slip events and low frequency earthquakes that transfer stress from plate motions up-fault into seismogenic depths. These transients are detected using seismography, geodetic, and tilt measurements in various settings (i.e. subduction environments and the creeping segment of the San Andreas). Not much is known about the mechanics of strain transients. In the structure lab we conduct experiments to model how strain transients relate to the rheology of semi-brittle systems. We are using a visco-elastic-plastic yield-stress fluid that has properties comparable to at mid-crustal levels. We investigate the impact fractures have on the deformation dynamics and combine our experimental results with numerical models developed by Luc Lavier at UT Austin. 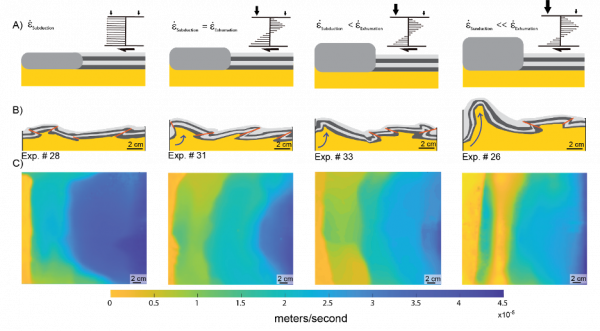 The Himalayas contain the highest mountain peaks, and it is the largest orogeny currently on Earth. Besides abundant reverse and thrust faults, the Himalayas have a large-scale normal fault system running along strike of most of its southern edge. To explain extensional faulting in a compressive regime, a theory called channel flow proposes that the normal faulting is caused by a combination of the gravitational pressure exerted by the Tibetan Plateau, convergence of the Indian plate, and differential erosion. These combined effects can lead to the extrusion of mid to lower crustal rocks along a fault zone (South Tibetan Detachment Zone) with normal fault motion. Here, we test whether the presence of a thickened crust in a compressional regime can lead to the exhumation of ductile rocks by employing physical experiments. These physical experiments include silicone, to model the ductile lower crust, and sand to model the brittle upper crust. 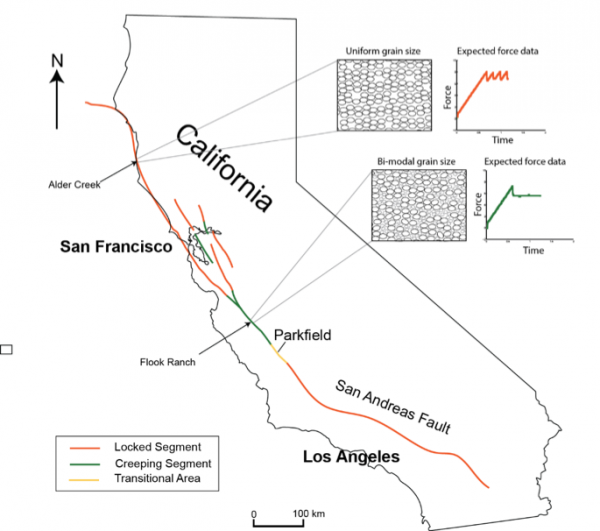 Faults accommodate displacement through a continuum of aseismic steady slip or creep to earthquake-generating stick-slip events. The mode of slip can change along the length of a single fault, as is the case of the San Andreas Fault. We study what effect the grain size distribution of fault gouge or cataclasite might have on the the mode of slip using a simple shear apparatus and acrylic disks. 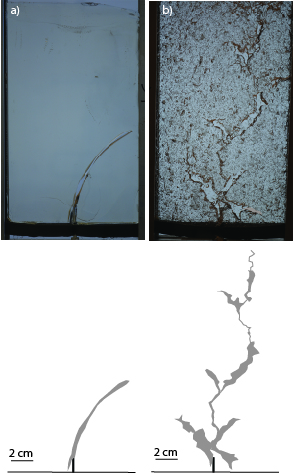 Understanding how rocks fracture is not only vital for risk management concerning earthquakes but it has a large socio-economic impact as it is essential for the extraction of hydrocarbons, geothermal energy, waste disposal, and CO2 sequestration. How a rock may fracture is dependent on the properties of the rock, or with other words on its rheology. Here we are conducting physical experiments investigating what effect the rheology has on the fracture pattern and propagation. We conduct experiments in a Hele-Shaw-Cell where we fracture a variety of materials ranging from powders, to gelatin, to hydrous gels, by injecting pressured air. We monitor the pressure evolution in the experimental cell and document the evolving fracture pattern.